Climbing the Mountain of Life

Recently I was fortunate enough to find myself at the base of a mountain in Southern Utah.  You may have heard of it: Angel’s Landing in Zion National Park.  Breathtakingly beautiful.  The weather was clear and bright with temperatures at a very comfortable 70 degrees.

The wonderful outside air was an ironic contrast to the nausea rising up in me when I saw what our guide was pointing at:

“This is where we will end up”, he said.  He was pointing to a mountain that looked far away and very, very high.  Worse, it appeared as if it actually turned on itself somehow; sort of like my stomach was doing at that very moment.

But I knew I couldn’t let my thoughts go down that pathway.  It took a lot of money, effort and time to get out here, and I really didn’t know if I’d ever get the chance again.

It’s not like I wasn’t warned.  “Oh some people just can’t make it to the top- what with the chains and all”, said the woman behind the register in the outfitter’s store.  “Wh-wh-what?”, I managed to reply.  Nobody told me chains would be involved!  “Oh, it’s no big deal.  You can always stop on the small ledge halfway to the top and wait for everyone to come back down.”  More on that later.

Undeterred, we signed up for the trip. Now that it was reality,  I did not want to be known as the woman who “almost made it”.  I thought about how I would feel if I told people I went to this famous hiking place but didn’t make it to the top.  Embarrassed,  Ashamed.  Humiliated.

So I did what I tell my clients to do: I put one foot in front of the other and I just kept doing it.  I didn’t stop and think about how tall the mountain was, or how “twisty”, or the dreaded chains.  I simply thought about where my feet were at that moment, and where the next step needed to go.

I did this over and over.  It got a little more difficult when I surpassed the resting area, as it is loosely called.  It is actually a very small area where the trail is slightly wider, say 5 feet across instead of 2.  This allows people to line up plastered against the rocks so that others can pass.

I passed several men who were too scared to continue.  I could have let this deter me.  After all, if men are too scared then it must be really scary, right?  No!  Again, I followed the advice I give my clients: reframe.  “I will be more powerful than all these wimpy men.  Just because some men say something cannot be done doesn’t mean I cannot do it”, I told myself.

I turned a corner and saw this: 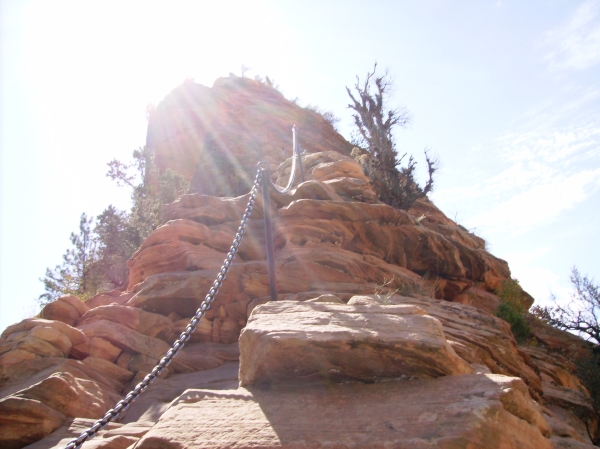 Part of the descent to Angel’s Landing. Scary but beautiful.

But there was no turning back.  I ignored the rising bile in my throat and kept repeating to myself about the next step.  What the next step would be, where I would put my feet, how I would not fall.  I concentrated on how wonderful my body felt with all the great exercise and how strong my legs were getting from all this climbing.  I looked down at my feet and NOT over the edge.  I did not look up at the mountain, other than to see where my next step should go.  I never thought about the final destination, I just kept focusing on getting to the next step.

It was in this way that I reached the summit: 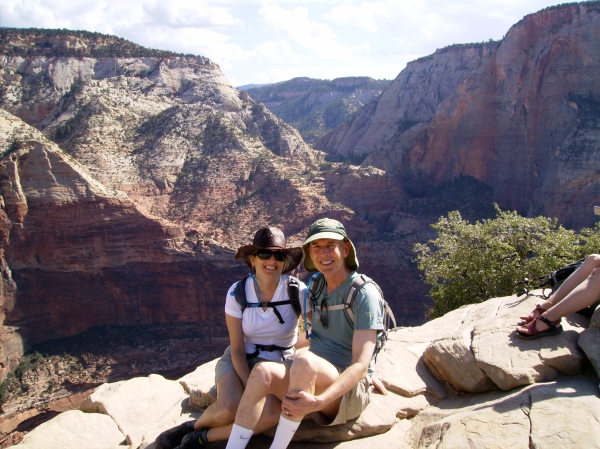 You cannot tell from this picture, but this top ledge is only about 10 feet wide in any direction, with a sheer drop off that I cannot even think about as I am typing this.  People have actually died from not paying attention once they got up here.  So, none of the pictures show me standing at the summit.  I literally never stood up.  But I was OK with that.  My goal was to make it to the top, and I did that.  Once I got there I cut myself some slack and enjoyed my victory rather than criticize myself for not doing it perfectly.  I am the woman who made it to the top of Angel’s Landing by doing it one step at a time.

Think about Angel’s Landing the next time you are faced with a situation or goal that seems overwhelming or impossible.  Do not focus on that.  Do not even really think about the final goal, other than to plan the little steps it will take to get there.  Once you know your little steps, just focus on each and every one of them.  Complete one and immediately move onto the next one.  They will eventually all add up to your final goal.  Then you can be the person who made it to the top of Angel’s Landing.

Please note my 48 hour cancellation policy. If you'd like to use your insurance, please visit Fees and Insurance.

Yes, I'd like monthly news about relationships and sexuality!